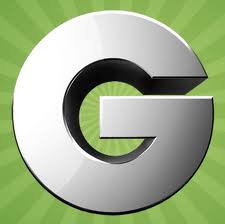 Everyone’s watching Groupon’s meteoric rise – and the news of their impending $750 million IPO, just announced this week, spurs continued discussion of tech bubbles and what’s next.

Many (including me) have long been skeptical of many things about Groupon – especially when it comes to businesses not understanding the risks of a daily deal service like this, and getting burned as a result.

In fact, Business Insider quoted research from Rice University that indicated some 42% of businesses that have run Groupon deals wouldn’t do it again.

But for all the Groupon horror stories, there are many success stories. American Apparel’s $50 for $25 deal probably netted them about $1.67 million and Gap’s $11 million Groupon deal moved an astonishing 440,000 vouchers – in just one day.

I don’t know it all – no one does, but here’s one thing I know for sure – Groupon’s got a formula that works. At least for now.

And Groupon is all about people. They sign up, get the daily deals delivered, they buy them and, even better (for Groupon and the merchant) they share them (sometimes annoyingly and intrusively — you know who you are) (please stop it).

Back to Groupon. I got this Super Daily Deal Thursday morning. I didn’t look at it until 8 hours later, by which time 234,636 savvy shoppers had snapped up $20 worth of merchandise for $10. That’s some serious dinero for both Old Navy and Groupon. 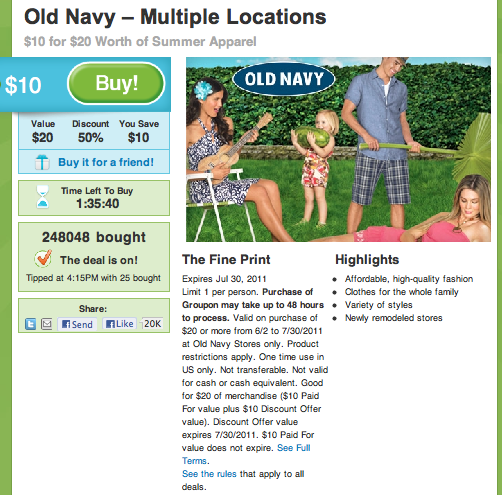 Even smarter, the terms and conditions, which, of course, so many people – including me – often forget to read. Old Navy is moving their summer inventory and Groupon is helping them do it. The deal applies not to ALL merchandise, but only to summer apparel. Even better, the deal expires on July 30th, so there’s an immediacy factor already built in. Or the prone-to-forget-and-never-use factor, which is highly possible as well.

My problem, personally, with Groupon deals? I buy the doggone things, then forget to use them. Doh. Groupon even has a handy little reminder email they send to prompt me about that – but still, sometimes I forget. See, I told you – I’m not the smartest. Oh wait, think Groupon likes forgetful customers like me? You betcha they do.

Groupon isn’t right for every business but, for some businesses, and used properly, it can be doggone effective.

What do you think about a promotion like this? Doesn’t it only make good sense for major retailers to use daily deal services to move merchandise to the deal-minded consumers? Infinitely more than it does for a restaurant to offer up food to a group of consumers who are only in pursuit of “the deal” and likely never to visit again?

It’s pretty clear, with Amazon getting into the action, and Facebook getting into daily deals, and a myriad of other similar business models out there, that daily deals are not going away any time soon.

What do you think?