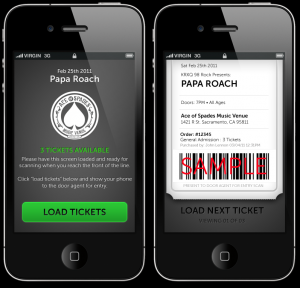 I go to a ton of concerts and movies, and I also travel a fair amount. And mobile technology – specifically, mobile ticketing, is changing the way I interact with the vendors from whom I purchase tickets. What about you?

Without a doubt, mobile technology has changed the way consumers interact with brands. In fact, some would argue that mobile has helped create deeper interactions between people and brands. There are currently more than 60 million people or 1 out of every 4 mobile phone subscribers own a smartphone. If the sales trends we discussed in a recent post on mobile hold true – it’s possible that 50% of mobile phone subscribers will own a smartphone by the end of the year.

Brands are definitely starting to take notice of mobile – in fact 59% of marketers plan to invest more dollars over the next 18 months. Location-based apps have been all the rage for a while, but there is another segment that has been dramatically growing as well — and that’s the one I’m focused on – mobile ticketing.

Within the global airline industry alone 280 million mobile barcoded boarding passes were issued, and by 2013 issuances are projected to jump to 480 million. Yikes! That’s 71% potential growth in the next two years!

In addition to airline boarding passes, there were 2 billion movie, concert and various other type of mobile tickets purchased this year. In fact, Juniper Research recently reported that by 2014 the demand for mobile ticketing will reach 15 billion. Yes, that’s billion, with a “b.”

For both the buyer and the seller mobile tickets are a huge convenience. For forgetful consumers like me, for sure!  You no longer have to worry about forgetting a ticket because it’s stored right on your phone – which, as we all know – rarely leaves your hand!! That’s worthy of a nerdy “w00t” for sure.

And businesses reap benefits in a number of ways. They can eliminate the costs of printing tickets, less handling is required, and I’m sure there are other benefits – those are just the two that come most quickly to mind.

Despite the seemingly bright future for mobile ticketing, there are still quite a few hurdles. Namely, if consumers are receiving their tickets on their mobile devices, shouldn’t that very same device be the point-of-purchase? While mobile ticket purchases could be huge for Google, Apple, PayPal and other providers who are springing up, this could seriously ruffle the feathers of payment networks like Visa, as well as major banks, all of whom make money with the swipe of every credit card.

And, as much as the industry has grown, businesses still have a long way to go when it comes to adopting mobile ticketing. As big of a number as 15 billion sounds, that’s actually only a small percentage of total tickets sold. And, as reported by Read Write Web, U.S. businesses are way behind the Far East, China and even Western Europe when it comes to mobile ticketing based on number of tickets sold.

U.S. entrepreneurs – get going! Here’s an opportunity to capitalize on something that just makes sense.

Mobile ticketing is clearly going to continue to grow as more people look to not eliminate clutter from their lives, but to add convenience by utilizing new technology like this. What do you think — as important as it is for businesses to have a mobile site for their customers, do you think it’s equally important for ticket purveyors to offer mobile ticketing options as well?

What innovative ways have you discovered brands using mobile ticketing? Lay it on us …