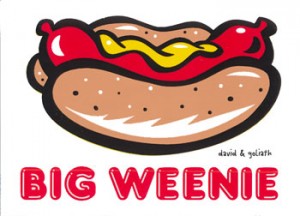 I think this is a lame move and that you’re a weenie for doing it. (Forgive me, I have teenage children – we talk like this on a regular basis).

In case you haven’t heard, Tasini is a former Huffington Post blogger who filed a lawsuit and is seeking class-action status on behalf of HuffPo bloggers, claiming at least $105 million should now be given to the bloggers. According to Jonathan:

“The Huffington Post is nothing without the bloggers who created the content.” As previously noted, I strongly disagree. In fact, I disagree so strongly, I thought I’d write a letter.

My Letter to Jonathan Tasini

I’ve been blogging for Huffington Post for a couple of years and, unless my experience was drastically different from yours, no one put a gun to my head and forced me to blog. Did Arianna Huffington or one of her evil minions cast a spell on YOU to make you write 216 blog posts against your will?

You agreed to blog for free. For one of the most influential and most successful websites on the Internet. You are NOT a victim and you do not deserve a zillion dollars for your 216 blog posts.

The last time I checked, America was a free country. You could have chosen not to write for the Huffington Post but, for some odd reason, it was cool beans as you zoomed through those 216 posts.

As a fellow writer, I don’t have an issue with the non-payment because the Huffington Post has a huge audience.  The website is an awesome media platform. And because of the great community of bloggers at HuffPo, I get to work with writers like Nora Ephron , who edits HuffPost Divorce, where some of my blog posts are published. I don’t know about you, but I don’t bump into world class authors and Academy Award nominated writers every day, so I consider it a perk. A big one.

Here’s a news flash: I didn’t write 216 blog posts. I agreed to work for free at Huffington Post and, in return, they gave me access to one of the largest online audiences in the world. I am still blogging for HuffPo and I’m not mad about it. I’m an adult and I take responsibility for my choices. And the exposure – and the audience – that HuffPo has and does give me has been invaluable.

And so, Jonathan, imma say it again, I think this is a lame move and that you’re a weenie for doing it. I learned a long time ago that life was not fair. I also learned that all choices have consequences. You must’ve missed that memo, but I’m here to tell you—get over it! Quit griping about it and go start your own publication. Go to therapy. Do whatever you need, but please, GROW UP.