close
Last week, an employee of New Media Strategies, the firm who handled the Chrysler social media account, accidentally tweeted from the Chrysler account during his morning commute and dropped the F-bomb. 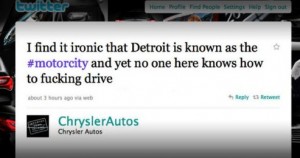 That tweet ultimately led to him not only being fired, but to the agency handling the account being handed their walking papers as well.

Gini Dietrich wrote a terrific blog post about the Chrysler tweet and in it, shared one of her early mistakes – and how much she learned from that incident. That post made me reflect on my own early agency days and a huge mistake made by a friend. He was supposed to have shipped something via FedEx and forgot. However, when asked about it, he didn’t think it through enough and quickly replied that he had, in fact, shipped the package as instructed.

Well, as anyone knows, FedEx records are easily trackable – and in just a short amount of time, it was widely known that he lied. That action impacted his reputation and credibility enormously. In fact, he didn’t last long at the agency after that happened and there was always a bit of a cloud associated with his name as a result of that one misstep. I always felt sorry for him, as he was a great guy and he made a mistake. And I’m sure he learned a lot from that experience.

Whether we like to admit it or not, we’re all human and we ALL make mistakes. Regularly.

Here’s a video, originally shared by my friend Scott Baradell (whose blog you would do well to be reading on a regular basis), that really puts a human face on the man known everywhere as “the guy who dropped the F-bomb from Chrysler’s Twitter account and got canned as a result.”  His name is Scott Bartosiewicz and he’s a Detroit native.

My original take on the situation was pretty harsh. I understood the reason NMS fired Scott and I could kind of justify the wake up call that Chrysler had about taking this business elsewhere – or maybe even in house – and giving NMS their walking papers.

But after thinking about it for a week or so, I’m not sure I still agree. In fact, there’s a great read from Jalopnik’s Ray Wert that brings up a good point:

But what this comes down to is that this was a mistake by a human being, not a deliberate action. And Scott seems like a pretty good guy. Contrast that with this one minute and 30 second video compiling every swear word uttered by Chrysler’s latest spokesperson, Eminem, a man who has turned misogyny into a profession, on just one album. You tell me, which kid from metro Detroit deserved to be fired – Eminem or Bartosiewicz?

Oh, and here’s the Eminem video, which is pretty priceless, too.

It’s a Matter of Trust – And Humanity

Bottom line, as an agency owner who regularly handles social media for clients, I’m very much aware of the trust that has been placed in our collective hands. And I take it seriously. But I’m also a human. And I realize that mistakes will happen – lord knows I’ve made my own share of them as I’ve climbed up the career (and life) ladder.

I’m relatively sure that if this kind of thing happened in our house, that I wouldn’t fire the employee who goofed — even if it meant losing the client business. Because, to me, it just seems like the right thing to do is to understand that we’re all human, we all make mistakes, and to treat people accordingly. And, for the record, in my book, the brand that can stand up and say “It happened, that stinks, but we’re all human. Let’s move on” seems like a pretty amazing brand. Kind of like how the Red Cross handled a similar situation recently. That kind of brand – well, it’s a human one – and one that I’d like to buy stuff from or support.

From my point of view, a Detroit based company putting a bunch of people out of work as the result of a poorly placed curse word seems not at all in line with the brand image of the Motor City and the people in it.

At least that’s the way it seems to me. You?