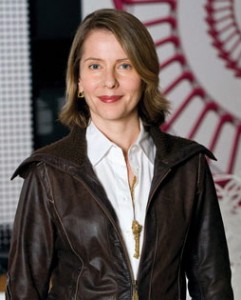 Paola Antonelli, Curator for Architecture and Design at the MoMA, did a TEDTalk in late 2007 previewing the exhibition “Design and the Elastic Mind,” focused on designs that impact the way we think, and this TEDTalk was published in early 2008.

Antonelli’s passion for design as art is infectious and the presentation compelling.

As she mentioned, the marriage between design and science is producing some beautiful things and now, some three years later, it’s interesting to see that theories of tagging (like we do on a daily basis with blog posts, videos and other digital content we produce), has become a way of not only tracking the information we create, but also sharing it with others.

Participation of the buyer (or the consumer) in the process – whether it’s manufacturing, marketing – think crowdsourced ad campaigns and/or consumer-generated Super Bowl ads and customer service are prevalent today – and will only continue to be more so.

Antonelli was once a practicing architect and stepped back from practicing so that she could focus on teaching, writing about design, and curating gallery exhibitions. She has received many accolades, including being named as one of the top 100 most powerful people in the world of art, and she is very much a force the art and design world.

In late 2010, The Economist interviewed Antonelli and the topic of conversation was Design in 2036. Her thoughts seem, at least to me, to be wonderfully spot-on.

There are still people who believe that design is just about making things, people and places pretty. In truth, design has spread like gas to almost all facets of human activity, from science and education to politics and policymaking. For a simple reason: one of design’s most fundamental tasks is to help people deal with change.

Designers stand between revolutions and everyday life. When the internet happened, they created interfaces with buttons and hyperlinks that enabled us all to use it. Designers make disruptive innovations manageable and approachable, so that they can be embraced and assimilated into life. And they never forget functionality and elegance.

In 25 years designers will be at the nexus of things. They will not be divvied up according to their reductive speciality (graphic, product, furniture, so 20th-century!). On the contrary, like physics, design will be loosely separated between theoretical and applied.

Antonelli’s TED presentation was terrific – even three years later, and actually very forward-thinking. And I figured that if I enjoyed it, you might, too.