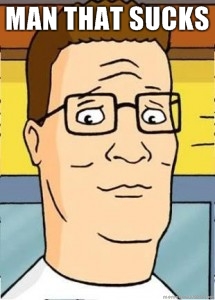 I (and many others) wrote about Kenneth Cole’s poorly-timed tweet yesterday, using the civil unrest in Egypt as an edgy way to pimp his new spring collection.

Kenneth, who was personally responsible for the tweet, later deleted it, then posted an apology on his Facebook page, taking responsibility for the bad decision. There were a lot of comments on my blog post, and some discussion on Facebook as well. The vast majority of comments agreed that it was in bad taste and were amazed at the audacity of Cole and looking for what their next move would be in terms of managing the PR crisis.

A few people also stood up for Kenneth Cole, citing the many charitable things the brand has done, supported, etc., and mentioning that the brand is typically edgy and this was nothing more than badly timed edginess. One of my dear friends even suggested that it’s time we stop our tendency to publicly crucify brands when they make bad decisions and just let them move on. His comment was that this isn’t ‘news’ and those of us writing about it and having discussions about it makes it news – when it’s not really worthy of so much attention.

I get his point. I really do. But my point is that it is news – at least in the professional world in which I operate. It’s news because how brands handle crises like this matters. It’s news because the public’s reaction to things like this is important to pay attention to, especially to those of us who study social media, who help brands manage their social media accounts, and who work with brands to put systems in place to handle crises situations – both before and after they happen. 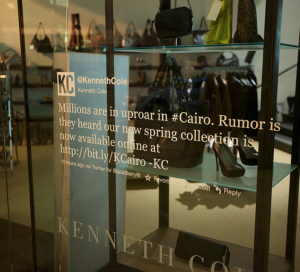 This morning everything changed. Pictures started surfacing showing several window displays which suggests – well, it flat out screams – that Kenneth Cole’s tweet wasn’t an accident or a lapse in judgment that resulted in a joke that was in bad taste. This photo, taken this morning in a retail shopping area – I’m guessing by the SoMa identification that it’s in San Francisco – is pretty much proof positive of that. But in reality, where it is doesn’t really matter – the fact that it exists pretty much indicates this was a campaign.

I’ve seen many blog posts and comments today on this issue. Mark Ragan’s post at Ragan.com opined that this was probably not intentionally done, but that the ‘fallout’ in terms of brand awareness, website traffic and buzz was all beneficial to Kenneth Cole – and something that we would see more brands doing in the future. Gini Dietrich laments that Spin Sucks and this kind of tactic is what makes people distrust PR and the people who spin. She also updated her post shortly after Noon today with the information that the photo had been photoshopped to the store window, which is what I originally suspected.

Bottom line, just about everyone – even those who were most appalled – were willing to believe it was just a case of bad judgment. It really didn’t occur, to even the most jaded among us, that this was a strategic, calculated move on the part of Kenneth Cole. Most of us gave him the benefit of the doubt on that front.

For the record, I wrote this post at 9am this morning but didn’t publish I really believed the photo was a fake. But the question still remained. My friend and intrepid investigative reporter Liz Scherer contacted both photographers via email and just notified me that both confirmed to her, separately, that there was no photoshopping involved and that these images are, in fact, real. The second photo was also taken in San Francisco and provided by Rachel Binx via Flickr – you can see it here.

So, either these two people are lying, or Kenneth Cole and his marketing and PR team accomplished exactly what they set out to do.

And that, Kenneth Cole, sucks. No question about it.

Update, 5:55pm CST: We’ve just been alerted that the photos were, in fact, real, but pranksters affixed them to the windows and Kenneth Cole and his team have denied any involvement. I stand corrected.