I love quirky and weird. I even like edgy. But I’m not such a fan of bad taste. Last week, there was a lot of conversation about Kenneth Cole taking advantage of the situation in Cairo to pimp his spring collection.

Today, a lot of the conversation – online and off – centers on Groupon and the Super Bowl spots created by Crispin, Porter & Bogusky using the plight of the Tibetians under Chinese occupation and rain forest preservation issues to pimp saving money by using Groupon. Didn’t see them? Judge for yourself.

Isn’t that kind of like saying to someone whose house just burned down “Hey, that stinks. But think how much you’ll save on your utility bills. And save even more by buying a Groupon for some burnt ends from your local BBQ joint.”

These are but two of the spots and you can see the rest here.

Save the Money is a hideous campaign. Even the tagline stinks:

“Money is one of our most important natural resources. Sadly, thousands of dollars are wasted every year. Until now.”

Don’t take my word for it, Brandbowl 2011 captured the online sentiment about the Super Bowl spots in real time. Groupon was in the #3 spot overall, garnering not only the lion’s share of the online conversation about spots in general, but the lone brand managing to receive negative sentiment – in overwhelming proportions. In fact, no other brand received ANY negative sentiment — only Groupon. 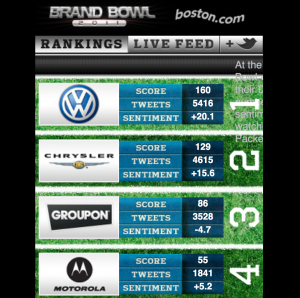 With a $15 billion valuation and set to go public in the not so distant future, I’m sure this won’t knock Groupon off the pedestal it has rightfully earned. However, as both a marketer recommending Groupon to my clients and a consumer using Groupon, I’ve gotta say this leaves a very bad taste in my mouth. And, as Cause Wired’s Tom Watson so eloquently opines, it’s a prime example of cause marketing gone horribly wrong.