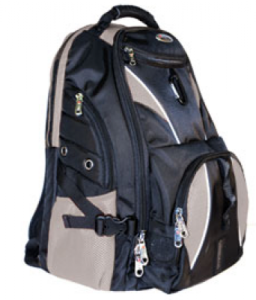 This post is not about marketing, strategy, social media or any of the other business related things that we usually write about. Instead, it’s about child safety. We think that’s important, too.

This headline in today’s Chicago Business was interesting enough that I stopped what I was doing and went to read the article. Doggone interwebs. They did it again.

Not only is this iSafe Bags’ alarm-embedded backpack something I might buy, I think it’s something that might save some lives. That really says something about society today, doesn’t it? Invented by a Chicagoan, hence the feature in Chicago Business, it’s worth a look:

I lost my second daughter in a mall once – it was the longest ten minutes of my life. It was back in the days of Johnny Gosch and his disappearance, and a time when America was beginning to realize that child abductions occur on a regular basis, and we were all more than a little paranoid about it. When I found her, sitting in the back of the store, on the bottom shelf of a display case, chin deep in stuffed animals I … well, you can imagine what I was feeling. And I never forgot the terror of those moments.

Today more than ever, with the stories of Elizabeth Smart, Natalee Holloway and Kyron Horman to haunt us, the safety of children is paramount.

I remember an incident that happened just a few months ago – in October of 2010. There was a 12 year-old Delaware girl who thwarted a would-be abductor when she was standing outside her school waiting for a ride. As the man pulled up beside her in a van and ordered her to get in, the quick thinking preteen grabbed her iPod touch and told the man she’d called 9-1-1. He then sped away. And naturally, was never seen again.

Makes you sick, doesn’t it? All the more reason to talk to your kids about strangers and the dangers they represent, and perhaps even arm them with tech tools that might well save their lives. I realize that not every parent wants to buy their kid a cell phone, but what a great story to share – the one about the savvy teen – during conversations about safety with your own kids.

Me, I’m still thinking about that backpack.

P.S. To the folks at iSafe … your products are amazing. Your website, however, is another story. If you decide you want to get serious about selling these products of yours, we can help.