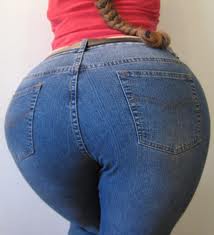 Get Twitter Followers. This phrase runs rampant in the social media world – at least the world that I play in. I see Tweets about this stuff all the time, and blog posts and ads ad nauseum. Seriously. If you came to this post thinking I’m going to tell you that it’s a good idea to get (which really means “buy” Twitter followers) – from anywhere – you need more than more Twitter followers – you need a brain.

“Targeted Twitter followers.” What exactly does that mean? I ran across one of those low-rent scam services (which is what inspired this post), and couldn’t resist digging deeper. As I did, I noticed a great call to action (e.g. “Buy Now”), but a lack of clarity when it came to explaining how it is that they really deliver. I suppose customers just have to trust that they know best.

Oh, and I’m sure they do. I’m sure that if you sign up for any one of those super duper, cost effective, pain-free services that they’ll go out and spend a whole lot of time finding just the right people for you to follow. Seriously people. This is the kind of crap that smart scammers dream up to try and hook people who either don’t know any better or who are – well, you guessed it – just plain too dumb to know any better. 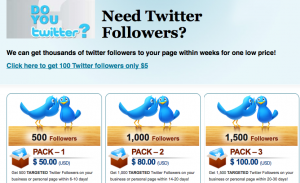 This gig – and a ton of others just like it – is a scam. If you think that you can seriously buy followers on Twitter (or anywhere) and that that will do you one bit of good, you need a reality check. Here’s a newsflash: social media is no different than real life. You don’t buy followers, you earn them. And, if you’re the real deal, that can lead to credibility and even some influence. And you don’t buy credibility you prove you’re credible. You don’t buy influence, you do or say or contribute to the community in ways that allow you to build a reputation as an someone who knows what they’re doing. That’s influence. No matter what the Klout flouters say.

And by the way, you can go to Google and search “get targeted Twitter followers” and find these services out the wazoo. I’m not going to give them any help by mentioning or linking to them here, but I will admit to clicking on all their links multiple times, just to give their PPC campaigns a little spike. That’s the devil in me – it couldn’t be helped.

I can point you to a myriad of spammers (or just plain morons) who clearly buy followers and/or use bots to find people to follow on Twitter and build their numbers. Those are the accounts (I can’t call them “people” because I’m not convinced that they are) that are clearly on autopost 24 hours a day, 7 days a week. They are the accounts that have 20K followers (or more) and a fairly equal number of folks they’re following in return, but that have an easily identifiable and disproportionately small number of tweets. Those are the accounts that you can scan for days on end and never once see an @reply to any other Twitter user or any kind of conversation whatsoever. These are accounts that are used as broadcast channels, which is the antithesis of what social media is all about.

Bottom line, quit thinking that social media can be gamed. That it can be done effectively in 10 minutes or less a week. No matter how many social media ninja, guru, rockstar experts tell you that – it’s just not true. If you buy into that crap, I’ll sell you some swamp land in Florida AND a set of Ginsu knives and toss in rock solid abs without any exercise to boot. If you want to integrate social media into your marketing strategy, that’s terrific. But the only way it’s going to be effective – and produce results – is if you build your channels intelligently. And if you don’t stand on a street corner asking for friends and handling out dollar bills in real life, why ever would you think that’s appropriate in the social media realm?

Wise up. Rarely do things that are worthwhile come without some kind of effort. And social media – well, I hate to tell you, but to really be effective, it requires that you not forget the “social” part. Relationships don’t usually get built overnight. Trust rarely happens that quickly either. Those things – they require work. Good, old-fashioned, hard work.