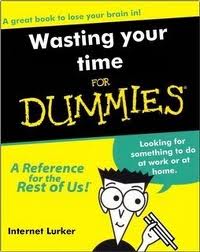 You know what happens. You’re working, kind of. Or at least you should be. Then you pop over to TweetDeck to see what’s going on with your pals on Twitter or hop over to Facebook, just for a jiffer. Then you see an interesting link (or 27) and pretty soon, it’s over. I blame social media. You’re pulled into the interwebs and all hopes of getting anything accomplished (work, that is) are dashed. Too bad somebody already wrote the book on it, because I’m a professional Internet lurker + Time Waster.

But I refuse to believe that’s all bad.

For instance, one day, I saw a random tweet complimenting a writer on a beautiful post. I was intrigued, popped on over to check it out, and before you an say “lickety-split” I’m sucked into what may well have been the most beautiful piece of writing I’ve ever seen. And, in no time, I’ve come to be great friends with Amy Oscar, the writer of that piece (and many more), read her stuff if you know what’s good for you. She’s an angel. You’ll see what I mean.

I few months ago, through random Facebook interaction, I discovered Ike Pigott, who might just be the smartest guy I know. It was actually his amazing post on the dangers of Friending Strangers on Facebook that hooked me and, naturally, I’ve been stalking him ever since. He has a way of writing that not only speaks to my heart, but engages my brain in ways that send cool neurons firing all over the place. Kind of like what happens when you eat chocolate, only with less calories. Jason Falls called him “The thinking man’s PR wizard” and that’s pretty apt. I’d like to amend that to read “The thinking person’s writer” – maybe Jason won’t mind that so much. Damn, but it makes me wish I could do that. Write like Ike, that is.

Today, when I was supposed to be working on the book that Wiley is paying me to write, well, you guessed it. I got sucked into Twitter. Again. This time I discovered the Hot Mess, that inspired the title of this post, Gordon McCleary, and all because of a random Tweet that said his blog was hilarious. Well, I’m bored. I need some hilarity. In fact, I consider it medicinal. So, off I went.

Gordon doesn’t know me (yet) but he had me at not only the fact that he’s a Yankee living in the south, but that he is, apparently, inspired to write by getting out and experiencing people, places and things. I’m like that. And I’m also a transplanted Yankee, which is a whole ‘nother story. I’m constantly ridiculed by my family and friends (for a variety of reasons), but many related to how I discover my blog content. Everywhere I go, I’m inspired by something new. I feel as if I’m literally tripping over great content. Ideas come a mile a minute and, as a result, I’m often (annoyingly) engaged in the process of snapping pictures, taking notes and getting all crazy documenting things so that I can write about them later.

Gordon apparently suffers from the same syndrome. Somehow, I knew I would like him – from the moment I saw the word “hilarious.”

So he had me early on. And then I dove into his post called Yankee Musings – A Hot Mess about his trip to the Winn Dixie, jamming to James Brown and multitasking – all of which ultimately lead the cashier to call him a “hot mess.” Clearly, he is. And clearly, since the only words that can ever be accurately described to describe MY life are “hot mess,” we are kindred spirits.

My work here is done. Consider yourselves introduced to three amazing people. Find them, read their stuff, engage your heart, your brain and your sense of humor. Then send me some cupcakes to say thank you.