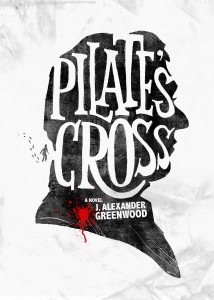 My good friend and frequent collaborator Alex Greenwood is the author of Pilate’s Cross, a newly-published mystery novel. Alex comes from a long line of literary folks and literally has writing in his blood. In spite of the pressure that gives a guy who wants to write a book, he’s managed to produce one heck of a great thriller, and one that is actually based on a true story. And, Alex opted out of going the traditional route and published Pilate’s Cross as an ebook.

Alex has an advantage over a lot of other writers because he’s also a seasoned PR pro, so not only can he spin a great novel, he knows how to promote it effectively. And as many authors will tell you, the writing isn’t really the hard part — it’s getting people to know about the book and actually buy it that can be tricky. Thus, a comprehensive PR plan, combined with a savvy social media presence and a solid online marketing effort will go a long way toward helping an author sell books.

In addition to opting to publish an ebook, Alex is integrating other sophisticated technology into the promotion of the book, a trend that’s becoming more and more popular among savvy writers and publishers. Like many successful authors, Alex harnessed the power of the Internet in a number of different ways. He has a great website, as well as a presence on Facebook and Twitter, where he actively participates and engages in dialogue with his readers, as well as with other authors.

But he didn’t stop there. Alex worked with Teri Rogers and her team at T2 + Back Alley Films, a digital creative services agency located in Kansas City, and produced a trailer for the book that’s simply out of this world. Teri and T2 are clients of mine, so I’ll admit right up front that I think they’re spectacular and their creative product is right up there with the best in the business.

But I’ll let you judge for yourselves. Here’s the trailer.

Now that you’ve watched it, I know you’re hooked, so head on over to Smashwords and download a 40% sample of Pilate’s Cross for free (or just trust me that it’s fantastic and pony up a whopping $3.99 and buy the doggone thing). You can also buy it on iBooks, Barnes & Noble, Kobo, Diesel, to name a few. And if you don’t want to take my word for it (which is rude and hurtful), there are some reviews you can check out here, and here’s an article in Present Magazine featuring Greenwood and Pilate’s Cross.

I really think there’s value in authors exploring things like book trailers to add a different element into their marketing efforts. I realize that there’s not a ton of money in writing books (understatement) and that not everyone can afford to do something like this, but combining the potentially viral nature of a trailer, the power of the Internet and social media marketing into the mix make good business sense.

And, call me crazy, but I really think that book trailers are something that writers of business books should seriously consider. Think about it – when you write a business book, it’s all about adding brand credibility, attracting new clients, being sought after for speaking engagements or a myriad of other business-related goals. Imagine how integration of a book trailer into your marketing efforts might impact those goals and, ultimately, perhaps bring you an even wider audience. Wouldn’t that be worth the investment?