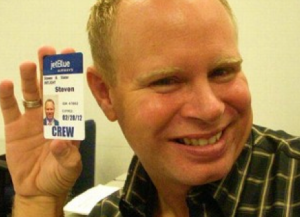 By now, if you’ve not heard of Steven Slater, the Jet Blue flight attendant who got fed up by a rude passenger and snapped, I’m thinking you might well live under a rock. The back story – as the plane was taxiing in, an anxious passenger unbuckled and stood up, reaching for the overhead bin and her luggage. Slater asked her to sit back down until the plane came to a stop, and she refused, continuing to open the overhead bin. As she began wrestling her bag out, it hit Slater in the head and he decided he’d had it. Grabbing the mic, he announced that after 28 years, he was officially done. He’d had enough of a crappy job and rude passengers. Then he did what we all have always wanted to do, he opened the emergency door and activated the slide. But before jumping his cute little fanny to freedom, he reached over on the beverage cart and – well, you guessed it, grabbed two frosty cold beers.

Never mind that he’s been arrested and could face up to seven years in prison, Slater is the latest unlikely suspect to become a bona fide American folk legend. You know you’re famous when someone like Jimmy Fallon sings a song about your badass self on national TV.

There’s a lesson here, folks. We need to quit being a bunch of pantywaists. As a society, it’s my observation that we have collectively become a bunch of scared-y cats (yes, I got that from my 4 year olds). Rare is the person who will make a fuss, take a risk, make waves, call attention to themselves or, God forbid, take a stand. As a result, we routinely settle for the status quo. That might be jobs we hate, relationships we want out of, crappy service, poorly made products or half-assed attention to detail.

Think about the last time you took a risk. Or maybe, think about how badly you’d like to. Or about the job that you feel stuck in or the relationship you’d love to get out of — or into. What about the last time you went to a restaurant and got cold French fries or a steak that wasn’t prepared the way you asked for it. Did you keep your mouth shut and eat it, or did you send it back, and ask for hot, fresh food and/or food the way you ordered it? Or think about the time you saw someone treating someone else poorly, acting the bully or some other such nonsense. Did you stop and speak up, or did you just put your head down, and move on? It’s infinitely easier to keep your mouth shut, but does it ever feel as good, or as right, as it does when you stick up for something or someone you believe in?

I could go on, but you get my point. Steven Slater might not have made the best career decision, but he made the decision that was right for him at that particular moment. He may fade into obscurity after his 15 minutes of fame are up and he’s paid whatever price the authorities decide he owes, but you know what – he took a stand. And that’s something to commend him for. When was the last time you took a stand? Or risked it all by betting on yourself and your abilities? When was the last time you spoke up and said something that would have been easier to just leave unsaid? Whether that was “I want out of this crappy relationship” or “I am madly in love with you.” When was the last time you made a decision, stuck to your guns and did the right thing – even though it cost you to do it?

No need to answer, just think about it. And the next time you have an opportunity to take a risk, try something new, say the thing that is hardest to say, stick your neck out, or take a stand, why don’t you think about trying it? I’m far from perfect, but I do routinely stick my big, fat neck out and say what I think, take stands where I think they’re called for and expose myself to all kinds of criticism as a result. And it’s not really so bad. And you know what – it’s infinitely better than being an ostrich. Any day of the week.

And as for Jet Blue, they’re enjoying their own notoriety, not only on national TV, but in the social media realm as well, as evidenced by Conan O’Brien’s recent tweet: “On JetBlue and the flight attendant just offered us “all the f***ing Terra Blue chips you a**holes can eat.” Love this airline!”