close
Lindsay Lohan sentenced to 90 days in jail. Isn’t it about time? Really. The girl is a mess — even her wackazoid parents shouldn’t dispute that. Notice that I say “shouldn’t” because they are so screwed up themselves that they have the audacity to even now be crying “no fair.” And, in reality, whether any of them like it or not, this is probably a better, smarter, safer step for Lindsay than any alternative. Left to her own devices, she’ll no doubt mismanage her life all the way to an inevitable drug overdose.

I’m a parent. And one thing I know for certain–none of us are perfect. You raise kids, make mistakes, figure them out, change tactics, ask for help when you need it and hope for some measure of good luck. But, I’d wager that just about any parent would agree that it’s nothing short of tragic to have watched Lindsay over the years, trying to negotiate a world filled with too much stardom, too much money, too much access to drugs, partying and bad influences, and too little parenting.

Drugs and addiction are serious business. And when it comes to rehab, after care is one of the most critical components of relapse prevention. You can treat an addict, and help them restart their lives, but if resources, guidance and monitoring aren’t a part of the process of “I’m better, what happens next,” then addicts are most often doomed to failure. Lindsay’s parents should realize that the best thing they can do for their daughter is to get out of the way and let people who know what they’re doing actually help her get better. Even if it means jail.

Sure, jail sucks. No argument there. But hopefully this will be a reality check for Lindsay and a first step toward recognizing the consequences of life. And, she’ll learn that when a judge orders you to do something and you don’t do it – well, they haul your ass to jail. 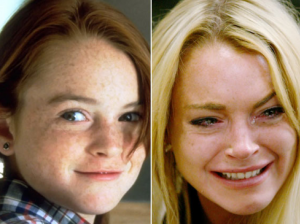 I feel sorry for Lindsay. But mostly, I feel hopeful. I hope that this is her wake up call and that spending some time in the slammer will result in a new outlook, a new attitude and some new behavior. In fact, jail might be the best thing for her. It is certainly better than being dead. I want to see the woman that the little girl on the left CAN become, not what she is today. And, for the record, I don’t feel sorry for her parents at all — they suck. And are as much to blame as Lindsay is – if not more so – for the mess she finds herself in today.