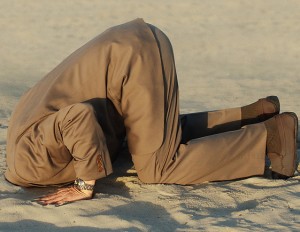 As if BP doesn’t have enough of a mess on its hands in its efforts to apparently single-handedly set about to destroy the planet, they’ve also got a buffoon at the helm. While I realize that BP’s CEO Tony Hayward and his issues are not nearly as important as stopping the oil gushing into the Gulf, it’s hard not to watch his antics and shake my head. And then be thankful that I’m not part of the PR team charged with damage control in Mr. Hayward’s wake.

This morning’s CBS News broadcast covered the fact that BP is now focused on steps to deal with the idiotic comments made by Hayward on Sunday, when he said “nobody wants this thing over more than I do. I’d like my life back.” Can you say “massive fail on all counts” seven hundred times. Quickly. And even that wouldn’t be enough to cover how unconscionably insensitive a statement like that is. When this is the leader of an organization trying to handle what is the biggest environmental disaster of our times, how can anyone have confidence in the company’s ability to be successful? Talk about having your head in the sand, Mr. Hayward seems to have almost his entire body buried in the sand – and it’s oil-drenched sand at that.

The BP public relations team is now trying to deal with the fallout and global backlash in a myriad of ways, including an apology posted on Facebook, to the families of the men killed in the explosion that started all this. Can you imagine this being your job? I can’t.

To add public insult to environmental injury, the Huffington Post reported today that BP is using Google and paid search in an effort to manipulate public opinion. Holy craptastic, Batman, will they never learn?

There’s more. YouTube is filled with videos expressing rage at the situation, Greenpeace UK has launched a campaign to rebrand BP and people everywhere are filled with exasperation and hatred for the oil giant. This is a classic example of the public dealing with a crisis by taking to their social mediums of choice to vent and raise awareness and indignation, as well as to spread the word about their various calls to action against the oil giant.

This YouTube parody video, Big Oilmance, created by @orlandojamie is on its way to viral fame and does a terrific job of summing up how a lot of us feel about this mess.

This song is dedicated to you, BP.
Thanks for everything you’ve done

Oh, the oil, caught in a big oilmance.

BP Lies Lies
Yeah, so what, some birds die.
Laugh, laugh to the bank.
Ha ha, an oil rig sank

Blah blah, we can’t hear.
Got fingers in our ears.
Close our eyes, disappear.
This is an oilmance.

We want your money, you make us so rich.
Get on your knees, ‘cause you are our bitch.