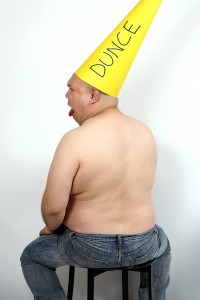 Auto-Tweets. I hate them. We all get them from time to time on Twitter. I call them The n00b Boobs. You know who I mean. THOSE people (or brands). The nimrods who think Social Media is still just another advertising medium. The people who program keywords into the system and as soon as someone mentions those particular keywords, they get an automatically generated Tweet, selling someone else’s crap.

This is the story of @BodyWorkerPro. And the guy in the dunce cap photo reminded me of him. He is one of those people who thinks Twitter is just another form of direct mail.

His words, not mine.

Via Twitter – @BodyWorkerPro: @PRDivaRach @TilsonPR The twitter response system is a legit and worthwhile means of addressing people just as direct mail does.

And why does he feel he needs to use this program? I thought you might ask…

Via Twitter – @BodyWorkerPro: @TilsonPR I don’t stay on the computer all day, so it does it for me.

And my favorite one: My Tweets are coming whether you like em or not!

Via Twitter – @BodyWorkerPro: @dorizinn I suggest you block my tweets. And you won’t be bothered by my tweets.

Here’s a news flash, @bodyworkerpro and all the other spammers out there (yes, this is actually something I consider spam) – It’s called SOCIAL Media for a reason. Computer programs aren’t SOCIAL. Engage people, not their Twitter feeds.

Our friend Ken’s mistake was that his program tweeted members of a very active South Florida social media community who called him out on his spam and were actually nice enough to give him words of advice/warning. He argued at first, seemed to be interested in changing, then sent out another dozen spam tweets. As a result of his arrogance, he was bombarded with Tweets, blocked and reported as a spammer and generally given a bad name throughout the South Florida social community. He shunned the most important people in his geographic area. The ones who could actually help him succeed. Never mind the fact that they’re a pretty powerful community.

Know your space, know your audience and, perhaps most importantly, respect the audience you don’t know you have.

Don’t be a Ken. (He also plays music when you enter his website! Yikes!) – You are welcome for the link. 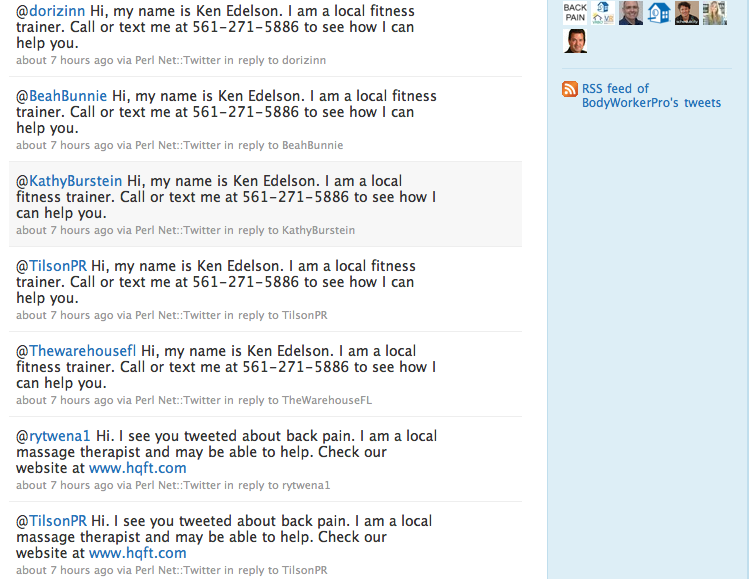