You’d have to live under a rock to not be aware of the massive oil spill in the gulf and BP’s as yet unsuccessful efforts to stop it. The spill is now larger than the Exxon Valdez and the worst environmental disaster in American history.

MSNBC reported just this morning that the top kill efforts failed. A long shot from the beginning, this should come as no real surprise to anyone. To date, the spill has dumped between 18 million and 40 million gallons of oil into the Gulf (depending on who you believe) following the explosion of the Deepwater Horizon in April.

From a PR standpoint, BP’s strategy in the handling of this disaster has always been questionable. CEO Tony Hayward’s foot-in-mouth statement in July 2009, “We had too many people that were working to save the world” doesn’t seem odd at all given that on almost every front, BP’s handling of this disaster has been inept, to say the least. Among other things, they have consistently downplayed the amount of oil that has been spewing from the broken well, the environmental impact and how tough it would be to stop the leak.

The fact that they’ve devoted little more than lip service to environmental concerns before this disaster is now a major PR focus and claims of greenwashing are, in my opinion, well-founded. Add to that the fact that their handling of this crisis in a traditional, heavy handed, old-fashioned and seriously outdated manner only serves to make the brand more reviled. And as my friend and PR guru, Alex Greenwood points out in a recent post, the fact that they’ve allowed two spokespeople to deal with this disaster instead of one only creates more problems.

U.S. Senator Bill Nelson, D-Florida, said it well recently when he stated “They keep making one mistake after the other. That gives the impression that they’re hiding things. These guys either do not have any sense of accountability to the public or they are Neanderthals when it comes to public relations.” He further opined that one of the reasons behind BP’s reluctance when it comes to the truth could be government penalties that can range anywhere from $1,000 to $4,300 per barrel of oil spilled into U.S. waters.

Greenpeace UK has recently launched a campaign to help rebrand BP’s logo and to raise awareness about the company’s plans to extract oil from tar sands. This is one of my personal favorite logo submissions, as well as the image used at the beginning of the post 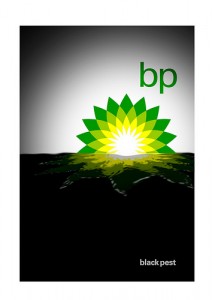 and you should head over and please go and vote for yours here. They haven’t published who is responsible for each link yet, but I imagine that credit will be coming soon. And, for all you creative types out there, what a great opportunity to be a part of history – go design something brilliant. The competition is divided into three categories: design professionals and students, the general public and under 18, and runs until June 28th.

All of this is a textbook example of any brand’s worst nightmare and the list just keeps growing. The @BPGlobalPR Twitter account – a runaway train that BP has done nothing to try and contain, with almost 90,000 followers to date, that number only continues to rise and is garnering considerable media attention. 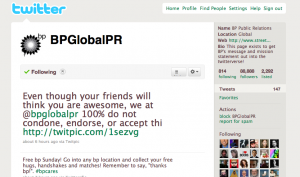 Their Tweets are so popular, and their sense of humor so ridiculous they’ve now been turned into a billboard campaign – yet more headaches for BP.

Bottom line – BP needs to wake up and smell the oil slick. They need to put their not inconsiderable money where their mouths are and start realizing that the rest of us who live on this planet care about saving it. They need to start paying restitution to fisherman whose livelihoods and ability to feed their families depended wholly on their ability to fish those waters. They need to double, triple, no — quadruple — their efforts to contain the spill and keep it from causing more devastation than it already has. And they need to stop the damn thing. Now.