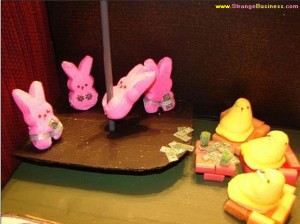 PEEPS Brand Marshmallow Candies are a great example of the power of social media!

PEEPS Marshmallow Candies are made by a family-owned candy company that has been in business for more than eight decades and three generations.  The candy is sold in more than 35 countries and in 2009 the first retail store, PEEPS® & Company, was opened in National Harbor, MD.

But have you ever noticed all the weird things people do with PEEPS? These candies inspire the 11-year-old in millions of people but it’s no surprise that as social media has grown—-so have PEEPS candies. I’d be willing to bet that the whacky world wide web has helped PEEPS laugh all the way to the bank.

Below are two examples of PEEP obsession: 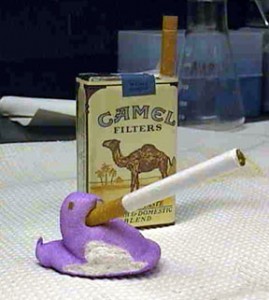 PEEPS Getting iPads at Apple Store

Huffington Post has a whole slew of PEEP pictures at the Apple store because “PEEPS want a iPads too”!  The Huffington Post photo gallery of PEEPS getting their iPads is hilarious:

You had to know this was coming. The release of the iPad and  Easter in the same weekend? C’mon, we’d be fools NOT to take pictures of Peeps at the Apple Store. Because these Peeps are just like everyone else, waiting to get their marshmallowy hands on that beautiful touch screen — but they’ll have to wait in line, too.

Go to HuffPo to see the rest of the PEEP photo ops, but here’s the line of PEEPS outside the Apple store. 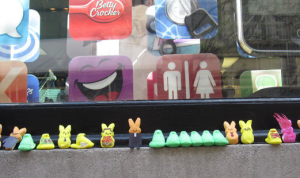 PEEPS are just a little bit weird and wonderful. Which means PEEPS are perfect for social media because people love to share things that make them smile or laugh.

Before Twitter and Facebook, you’d spend all DAY sending pictures of smoking peeps to your friends—-if you could find them!  Thank goodness it’s 2010 and it’s much easier to find and share the bits of our daily life that are really important—-like taking PEEPS to the Apple store or watching a PEEP pole dance.  HAPPY EASTER WEEKEND!