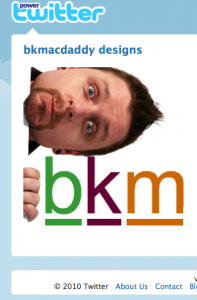 This is a guest post, written by my great friend Brian McDaniel, a designer, social media upstart and all around terrific guy. In addition, he’s prolific in the writing department and one of the people whose content I actively seek out. Read on, you’ll see why …….,

Let me start out by saying I am a Google fan. I use Google Reader for my RSS feeds. I utilize Google Analytics, Gmail, Google Apps, and pretty much anything else they offer. I am in love with my Android phone and all its cool apps. I thought the Google Superbowl ad was brilliant. And the Google Nexus One phone is on my list of geek gadgets I am salivating over. So understand that this post is written by someone who is firmly and happily planted in the ever-expanding Google nation, not your typical hater who jumps at the chance to rip apart the “next big thing.”

Yesterday Google announced their new foray into social media, Google Buzz, which they will be rolling out to Gmail account holders over the next few days. By all reports – and there are quite a few already – Google’s latest release has a lot of features that could make it useful for many. Of course, it also has a lot of similarities to current social media powerhouses Twitter and Facebook. It appears that Google is attempting to take some of the best elements from these two and enhance them with some of their own. One that I am particularly interested in is the geo-tagging ability of your status updates and its integration with Google Maps layers, which could have the potential for more real-life applications and networking. You can read more about all that Google Buzz has to offer by clicking here.

But here is my issue: a few months back Google burst onto the social media scene with Google Wave. It was going to change the way we communicate and possibly replace email altogether. The real-time collaborative functionality was heralded as revolutionary, and anyone who pays attention to these types of things (translation: geek) began impatiently looking for ways to get our Google Wave invite so we could experience the revolution firsthand. Invites were given away as prizes for contests on blogs and social networks, and the mad rush to get yours seemed to consume the online airwaves.

Google chose to roll out this next big thing in, well, waves, sending invitations via Gmail to the chosen few and giving them the ability to invite a few they choose to join them. When I finally got mine, I spent a day or two marveling at the technology and trying to find ways to interact with others in the fresh and exciting frontier. I read everything I could about it, wrote a review or two of my own, participated in discussions and then began waiting for more people to receive their invites.

This is when the problems began.

Although Google Wave had its own functionality problems, crashing on occasion as they worked out the bugs and missing some seemingly obvious capabilities that were added later, the biggest issue was that so few people had received invitations. Yes, they started out giving invitations to a million or so people, but I certainly didn’t know many of them.How do you use an interactive platform when no one you know has access?

Soon the outcry came. Users were wondering when everyone else would be allowed to experience Wave, and those who had yet to receive invitations felt ignored or left out. As the buzz (pun intended) died down, the demand for invitations shifted to a point where people couldn’t give them away. It wasn’t long before I had over 20 invites that I still haven’t passed along because no one is interested anymore!

The media backlash rose to a dull roar and what was once hailed as revolutionary was relegated to a fad that never caught on. Still today I see occasional tweets asking if anyone is still using Wave. I know I’m not.

Not long after the Wave hubbub, Google sprang the Nexus One on us, and the gadget geek world went into a flurry again. The exciting new phone was dubbed a potential iPhone killer, but soon there were complaints about the lack of support, confusing marketing and availability, and outrageous pricing. Yes, I want one. But my own Wave experience combined with the reports I’ve read – not about the phone itself, but regarding surrounding problems – have made me cautious about diving in.

The failure on Google’s part to unveil their golden children in ways that catch on seems to me to be a lesson they are not learning from. Now they are releasing Buzz, and the apathetic response I have witnessed proves this failure to be true. Articles are being published left and right about Google Buzz, touting its cool features and predicting its success or failure. Any way you look at it, success or failure of Buzz could be riding on Google’s past mistakes rather than the technology and its implementation.

Just this morning I checked to see if I had received my invitation to try it out, only to feel that same disappointment when it was not there. I also used my phone to try Buzz Mobile, which is readily available for anyone, but I was shocked to find out that it only works on iPhones and Android 2.0 operating systems, which my T-Mobile myTouch 3G has yet to have the ability to be upgraded to! The inability of Google to take into account the effect its rollout methodology has on the mindset of the consumer is a glaring oversight. I’ve spoken with others who have expressed their desire to try out Buzz and the consensus is one of feeling “left out”. Inferior. Overlooked. What does this do to the consumer base that Google hopes to build?

Lately it is almost impossible to spend any time online without hearing about something that Google is doing. The search giant’s attempts at world domination – search, email, telecommunications, operating systems and now social media – could be resulting in an online oversaturation that backfires, crippling their desire to make everything Google.

Google is already a household word. It’s one of the few organizations whose name has become a common verb (“Just Google it!”) Is it really necessary for them to become everything to everyone?

As I said, I am a Google fan, and will continue to be. But I have lost a little respect for what seems to me to be a somewhat desperate attempt to conquer the world of all things geeky. I am not going to walk away from Twitter or Facebook to give my attention to Google’s next plaything, nor do I believe the masses will choose to do so. Perhaps Google should slow down a little bit and focus on what they do really well, while taking some time to learn from their mistakes. The products are fantastic, and I believe could be very revolutionary if handled correctly. But I fear they may become victims of their own hype and we will miss out on what could have been.

Are you using Google Buzz? Is anyone else you know? Do you plan to try it out, or pass it off due to recent other Google experiences? Please share your thoughts on this latest development in the comments below.

You can check out the brilliance that is @bkmacdaddy by visiting him here. And, for the record, I agree with absolutely everything Brian has said here – his experiences mirror my own. As such, I am not at all interested in exploring Google Buzz. For me, Twitter and Facebook work just fine.