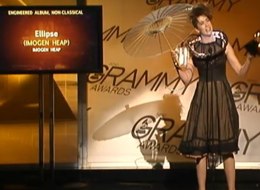 Imogen Heap created a buzz at the Grammy Awards with her Twitter Dress. Imogen’s Twitter Dress had its own Twitter feed and displayed Twitter pics sent by fans in real-time using the hashtag #twitdress.

The dress was cool but the fact that the dress exists is the big news!  Mashable reported that Heap’s dress was envisioned as a way to let fans “accompany me on the red carpet.”  The reason social media is here to stay is because people want to share their lives, in real time.

The Twitter Dress is another signal for skeptics that social media isn’t just a fad—it’s a part of our daily lives.