close
Looking over photographs from Port-au-Prince showing in graphic detail the devastation in Haiti is gut-wrenchingly sad. It literally makes me want to pack a bag and head over there and help. Since that’s not possible, I’ve donated money, gathered items to take to UPS to ship over there, and done all I can to help spread the word about various fund raising undertakings to help the survivors. It doesn’t seem like very much, in the big scheme of things, but it’s what I can do, for now, so that’s what I’m focusing on. And there are many other people doing the same thing – all over the world.

The impressive thing, from the standpoint of not-for-profit groups out there, is that the Haiti disaster is a textbook example of how effective social media can be when it comes to awareness and fund raising. And there’s one simple reason: not-for-profit groups are typically about just one thing – people. And social media – well, that’ s all about people, too. So, when you can effectively connect people who need with people who care, and people who want to help and make a difference, beautiful things happen. This photograph from Haiti really brought that concept home for me. 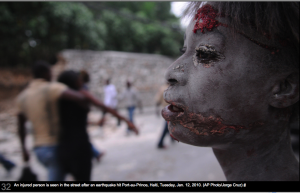 Mobile marketing has played a huge role in the Haitian fund raising efforts and will continue to do so for not-for-profit groups who are savvy enough to integrate mobile into their marketing strategies. Mobile is inexpensive, immediate and easy for consumers to respond to – all of that spells success for not-for-profits and fund raising efforts. According to today’s report from CNN.com, the Red Cross has raised a staggering $21+ million as a result of their $10 donation campaign (text Haiti to 90999), sanctioned by the US State Department; definitive proof that asking for a small amount and making it quick and easy for people to give that amount contribute greatly to the overall success of an undertaking. The campaign raised $3 million in the first 24 hours alone, and by Thursday, 1/14, that total was at $10 million, only to more than double in the space of just a few days.

And what’s even more mind-blowing is that in all of 2009, a total of $4 million was donated to all charities. Kind of makes you have a lot more respect for social media, now, doesn’t it?

Ben Parr’s recent Mashable article is a great overview of the impact of social media in the world today and its impact on Haiti, China and the world. He sagely reminds us that social mediums aren’t the be-all, end-all when it comes to making a difference. But, what they, coupled with technology, mobile and otherwise, do allow, is for us to disseminate information quickly and efficiently, mobilize and organize fund raising efforts and lay the ground work for what’s to come. Parr’s post ends with the words “It’s up to us, the people, to make the real impact on our world.” I think that says it all.

Once again, not-for-profits are about people. Social mediums are comprised of people. And when you put the two together, whether it’s to lend a hand and raise money in times of crisis or whether it’s to help raise money for the local animal shelter, social media simply makes good sense for agencies trying to do good.